Researchers at the Technion-Israel Institute have directed stem cells to differentiate into neurons with the potential to repair spinal damage that causes paralysis in the legs, known as paraplegia. In an animal model, subjects suffering injury to their spinal cords, causing them to lose all mobility and feeling in their hind limbs, were treated with human stem cells cultured to differentiate into support factors that promote neural growth and survival. Three weeks after administering the stem cell treatment, 42% of the subjects began either walking or showing significant improvements in bearing weight on their hind legs. Furthermore, over 75% of the subjects responded to stimulation in their hind legs. When compared to the placebo group that received no stem cells, the results were impressive and demonstrate  the immense potential of utilizing stem cells to restore the neural connections in the spine following a traumatic injury.

The Hairy Truth About Stem Cells

Researchers at the University of Southern California (USC) School of Medicine have pinpointed the biological processes that lead to the differentiation of skin stem cells into follicles that grow hair. As people age, the ability to regenerate skin cells declines and therefore, the follicles produce less and less hair.  Utilizing a combination of bioinformatics and molecular screenings, the researchers studied the differentiation of stem cells into hair follicles of newborn mice, honing in on genetic factors and environmental cell signals this process entails. The process was then successfully implemented when applied to adult mice that lacked hair by introducing the necessary factors that signal stem cells to differentiate into organoids that will grow hair.

Researchers at Stanford University School of Medicine have found that an inflammatory metabolite in the body, typically suppressed with pain relieving and anti-inflammatory drugs like aspirin or ibuprofen, expedites the healing process for muscles by activating stem cells. The metabolite, called prostaglandin E2 (PGE2), is part of the body’s normal inflammatory response, but painkillers usually taken to relieve muscle soreness inhibit its production. The discovery of this mechanism has given insight to scientists of the micro environment stem cells need to function in, paving the way for enhanced treatments for muscle injuries and trauma as well potential treatments to combat the natural degradation of muscle mass that accompanies aging.

Researchers at Cincinnati Children’s Hospital Medical Center Heart Institute have discovered a possible method of directing stem cells to fuse together and form functional skeletal muscle. Utilizing gene therapy, their research has provided insight into correcting disorders like muscular dystrophy, and congenital and metabolic myopathy. By identifying the genes Gm 7325 and Tmem8c, as well as their corresponding proteins, researchers have determined their paired role in directing muscle stem cells (myoblasts) in fusing and creating functional striated muscle tissue, which is responsible for movement.

Ryan Tannehill, quarterback for the Miami Dolphins, avoided invasive ACL repair with a stem cell treatment. A common injury among athletes, ACL tears require surgery and long months of recovery and physical therapy to restore normal mobility and function in the knee. Tannehill was able to avoid this arduous process in favor of a stem cell treatment, and although he is required to wear a brace, he does not display limited mobility typically associated with this injury.

Researchers at UT Southwestern Medical Center have identified a gene that directs the production of a stem cell factor (SCF) and a protein, which are both essential for hair growth and pigmentation. Stem cells are concentrated in the skin around hair follicles, and when both the protein and the SCF are active, they move up from the bulb of the follicles to produce pigmented hairs. The genes responsible for the production of the KROX20 protein and the SCF were discovered by working backwards, turning off the gene and observing, in mice subjects, that no pigmentation was present in the hairs and that the subjects became bald.

Summit for Stem Cell Foundation’s scientists are developing a treatment protocol that calls for the reprogramming of autologous [the patient’s own] stem cells to produce dopamine to treat PD. An important aspect of Parkinson’s disease is neural degeneration, which vastly decreases the production of dopamine, a hormone necessary for proper movement. By differentiating stem cells to replace the damaged neurons, the treatment holds the promise of significantly alleviating the symptoms [loss of muscle control] associated with Parkinson’s.

Dr. Abba Zubair of the Mayo Clinic’s Florida campus, known for their research in regenerative medicine, is spearheading research on the effects of microgravity on stem cell growth. In previous studies, the weightlessness in microgravity was shown to promote fast and effective reproduction of stem cells. The ability to rapidly multiply stem cells would go a long way toward eliminating the deficit of available stem cells that could be used to treat the inflammation associated with strokes, and to promote neuron and blood vessel regeneration. 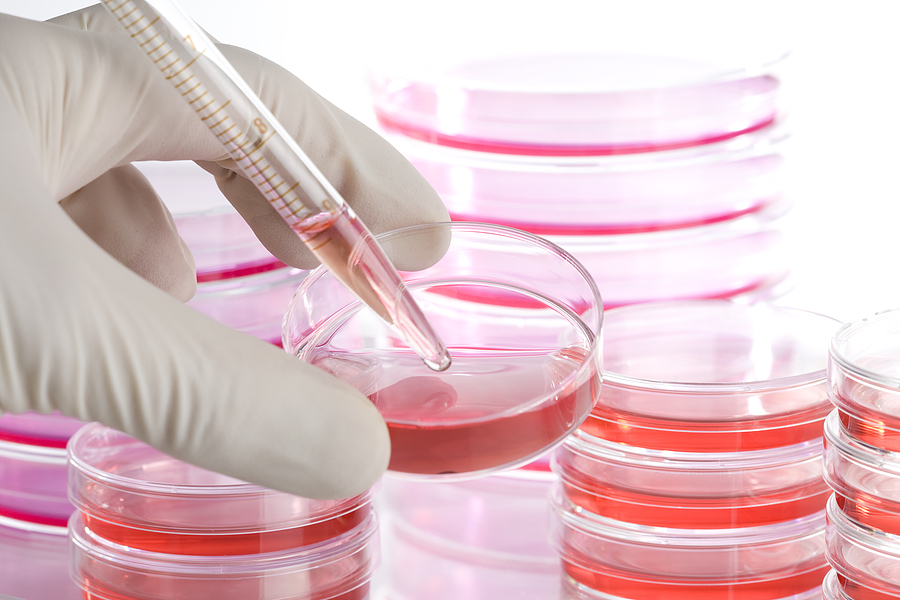 Recently published research from the Yale University Cancer Center has evaluated the effect of a stem cell’s surrounding area on whether or not the cell will grow or die.  The scientists, led by Kailin R. Mesa, observed stem cells on a hair follicle using live microscopic imaging to determine that the environment in which the stem cell is located plays a critical role in the fate of that cell.  Mesa’s team also observed that stem cells contain a feeding mechanism to rid the skin area of dead cells. Recently published research out of South Korea has presented a new method of differentiating mesenchymal stem cells [MSCs] into liver cells for autologous use in regenerative medicine.  Geneticists found that the overexpression of two genes within MSCs, oct4 and sox2, resulted in the stem cells converting into fully functional hepatocytes, or liver cells, capable of producing urea and storing glycogen.